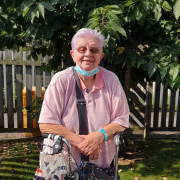 Margaret had been involved with Ageing Better Middlesbrough for a few years, when the first lockdown hit. She had lost two friends to cancer and has problems with anti-social behaviour where she lives and her mental health was suffering.

She received befriending calls from Hope’s Wellbeing team. These were a lifeline for her as “ The calls helped me and kept me level, I don’t know what I would have done without them. When the lockdown eased a bit I met up with Linda for a coffee. I find it difficult to get up on a morning and get ready, meeting her gave me a purpose, something to do and to get to.”

Since then, Margaret has joined in with our picnics, coffee mornings, cookery sessions, drop-ins and visits to the seaside. Her mobility has suffered during the lockdown months but she is now getting out and is determined to keep going. She has also made a friend through group meetings. The Wellbeing Service has helped Margaret start getting out of the house after lockdown. Being with others has given her a new focus and has helped to improve her mental health. 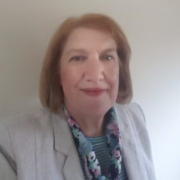 At the beginning of the first lockdown, ABM asked for volunteers to help provide technical support over the phone for older people in the area.

Fast forward and they now have 14 volunteers. One of the first to respond was Jeanette Power Jepson who had previously attended Tea and Tech at the Hope Foundation.
“Given that Ageing Better Middlesbrough has helped me achieve certain goals, I felt like I wanted to help others who were in my position.

David initially taught me how to shop online, use WhatsApp, surf the web, and generally become more up to speed with my device, so I really felt like I could help those who needed it.
The framework they provided was great too. It was very well structured, and I knew I was in a good position to pick up the phone and begin talking.”

For many ABM members, becoming part of the digital world is daunting and providing digital support during the Covid pandemic has been even more challenging for the team, but also really important:
“Giving information and digital support for people who had to stay home was vital. Many of them are worried, which only heightens their fear of having to use technology. It’s a domino effect…

I’ve helped people with doctor’s appointments, downloading games, WhatsApp, sending photos and emails, video calling and lots more. Once these steps are complete, you feel a huge sense of pride. Their reaction over the phone (when they complete various tasks), is fantastic.”

73-year-old Barbara Gibbon is just one of the people who has benefitted from Ageing Better Middlesbrough’s digital volunteer initiative. She has received help from Jeanette (above) over the last few months and believes she has come on leaps and bounds.

“Initially I got a call from Ageing Better Middlesbrough’s Befriending Service to see how I was. I happened to mention that I struggled with technology during the call.

Their Digital Inclusion Officer, David, gave me help with online shopping, and after that, Jeanette has helped me with lots of other things.

To my amazement, I was able to send photos to my granddaughter who lives in Manchester… I even video called her! I think she was just as surprised as me when she saw the phone ringing.

I’m hoping to learn a lot more from Jeanette in the future, she’s been a saviour for me over the last couple of months. I’m also going to meet the team in person to thank them, and hopefully attend ‘Tea and Technology’ sessions.

The fact that Ageing Better Middlesbrough are providing an outlet like this is brilliant. I really appreciate their efforts. It’s given me a new lease of life and I’d be completely stuck without them. My daughter is less worried knowing I can video call her now too.” 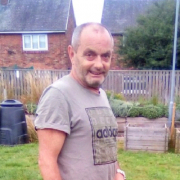 Frank Savvery was supported during lockdown by the ABM Telephone Befriending Service.

This service was a huge support for Frank during such a difficult time; at a period in his life where he felt, lonely and was struggling with past trauma that caused frequent night terrors. Talking to a dedicated befriender helped ease his anxiety.

Digital Inclusion has provided Frank with an iPad and support to set up a personal email and online contact with his GP and health services. This has proved invaluable, as now Frank is able to arrange his own prescriptions and delivery of medication.

The Older Peoples Wellbeing Project has introduced Frank to Middlesbrough Environmental City Allotment project at Jellystone Grove Hill in Middlesbrough. He has been busy tending to the land and has planted vegetables that he is hoping to use to prepare nutritious meals when the produce is ready to harvest.

The sessions at Jellystone have facilitated opportunities for Frank to socially connect with other people and also an opportunity for Frank to continue as a volunteer when The Wellbeing Service ends in March 2022.
Frank is now attending other well-being sessions during the week that include Woodside Wellbeing Hub and outings that have been arranged with the service.

Frank has grown in confidence over the months and is less anxious within a larger group setting. He recently sent the following message:

Neil* (not his real name)

Neil heard about the Hope Foundation from Saint John of God. He had to move to Middlesbrough during the covid pandemic and found himself isolated in a new place.

He came to The Hope Foundation wanting to gain qualifications, find our about volunteering opportunities and get connected. He says, “The conversation with Kim was so much more. We talked about my long term and future goals in football coaching and Kim gave advice and guidance on the different sectors that this opens for me such as supporting others in difficult situations using sport. We started with Kim completing a CV to apply for voluntary positions and introducing me to MFC Foundation a support organisation for people like myself to make new contacts through sport. We also talked about entry requirements that employers would be looking for as well as experience and I now know the steps and links to be made to achieve this.

Kim referred me to the Hope Digital Library as I had expressed motivation and interest to learn but I only have a mobile phone device. David dropped off a laptop.

The Hope Foundation has made a big difference to my mental health; connecting me to my goals by informing me of the opportunities available in the Middlesbrough area. I moved to the area around September last year and because of lockdown felt excluded being in a new town and not knowing the services available. The Hope Foundation has help me to understand the steps I need to take to get there and feel more positive about my future and how I can progress.”

Neil went on to study for qualifications with Hope and now volunteers in a community football session and is working towards an FA Playmaker Award with MFC Foundation.

This site uses cookies. By continuing to browse the site, you are agreeing to our use of cookies.

We may request cookies to be set on your device. We use cookies to let us know when you visit our websites, how you interact with us, to enrich your user experience, and to customize your relationship with our website.

Click on the different category headings to find out more. You can also change some of your preferences. Note that blocking some types of cookies may impact your experience on our websites and the services we are able to offer.

These cookies are strictly necessary to provide you with services available through our website and to use some of its features.

Because these cookies are strictly necessary to deliver the website, refuseing them will have impact how our site functions. You always can block or delete cookies by changing your browser settings and force blocking all cookies on this website. But this will always prompt you to accept/refuse cookies when revisiting our site.

We fully respect if you want to refuse cookies but to avoid asking you again and again kindly allow us to store a cookie for that. You are free to opt out any time or opt in for other cookies to get a better experience. If you refuse cookies we will remove all set cookies in our domain.

We provide you with a list of stored cookies on your computer in our domain so you can check what we stored. Due to security reasons we are not able to show or modify cookies from other domains. You can check these in your browser security settings.

We also use different external services like Google Webfonts, Google Maps, and external Video providers. Since these providers may collect personal data like your IP address we allow you to block them here. Please be aware that this might heavily reduce the functionality and appearance of our site. Changes will take effect once you reload the page.